T6 Harvard Ltd (Previously T6 Harvard Aviation Ltd) has been training pilots to fly the Harvard since 2010. T6 Harvard Ltd has become one of the most experienced Harvard training organisations in Europe and has trained many pilots that have gone on to fly the Spitfire, Hurricane and Mustang P-51.

The Harvard continues to be the go-to aircraft as the “Advanced Trainer” for fighter aircraft as it was designed to do 80 years ago. Our Mk4 Harvard is not only stunning in its DAF livery but also a joy to fly in amazing condition inside and out… Our aim is to get you up to “solo standard” Come fly with us!

Hourly rate – The hourly rate for the T6 Harvard is currently set at £660.00 per hour wet +VAT. Hourly rates are based on the Hobbs meter which is set at air time. An additional charge of £15.00 +VAT per landing will be made and any other costs incurred for training at nominated airfields such as landing fees. (T&C apply)

See below our free downloads and training material:

If you are interested in a conversion course to the mighty Harvard, please download the above manuals, just to whet your appetite for free! The RCAF manual is relevant to our MK4 T6 Harvard. (G-BJST Wacky Wabbit)

Free download of the basic checklist – This is something to study and commit to memory.

We are always collecting and downloading manuals which we offer on this web site for free. We are always o the lookout for warbird manuals to add to our collection so we can share amongst other enthusiasts.

To see the cockpit of the wabbit please click on the links below: 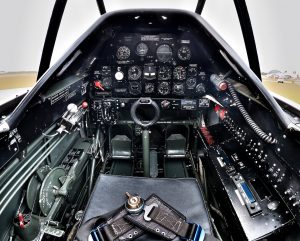 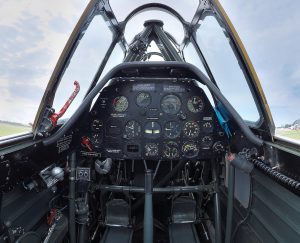 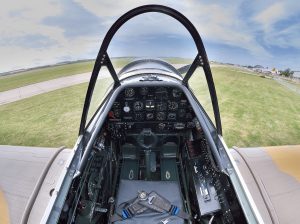 The length of the course

The length of the course – varies depending on pilot experience but generally ranges from 5 – 15 hours. Students beginning the course should have a tailwheel endorsement in their logbook. If you do not have a tailwheel endorsement we can arrange this by flying the L4 Grasshopper or Chipmunk see below.   Harvard conversions will be carried out on G-BJST “The Wacky Wabbit.”

Tailwheel conversions – For any pilot considering flying the Harvard, we strongly suggest that you have some pre-training on the DeHaviland Chipmunk (click). Getting time on the famous ‘Chippy’ is now becoming increasingly difficult with dwindling numbers of serviceable aircraft available, however, we can offer expert training tailored to progression for the T6 Harvard.

Solo Hire – T6 Harvard Ltd is one of the only companies in Europe that hire out the T6 Harvard. The prerequisite for hiring our Harvard is the completion of  “Conversion” course. The solo flight may only be authorised at T6 Harvard Ltd Instructors discretion which varies from student to student.

Advanced training – Whether you are looking for a full T-6 checkout or recurrent training, you will walk away with a thorough understanding of the aircraft and the confidence, proficiency, and respect that the T-6 Harvard demands. Our experienced warbird instructors can also offer transition programs for those wishing to advance further on to high-performance WWII fighter aircraft. We will tailor the training package to suit your background and experience level, making the step to the bigger fighter aircraft an enjoyable, safe, and educational experience.

Meet the instructors – You will get expert tuition from our instructors who between them have over 60,000 flying hours! T6 Harvard Aviation instructors have many hours instructing specifically on the Harvard and guarantee excellent, safe instruction passing on years of knowledge and experience.

Andy Goodall made his first T6 Harvard solo in April 2013

Make the transition – “Most pilots dream of flying a warbird. Quote: “After many years of flying GA aircraft, I made the transition from ‘nose draggers’ to ‘tail draggers’ (traditional landing gear) and never looked back”!  “Having completed my tailwheel differences training  I made the transition to the magnificent Harvard. T6 Harvard Ltd allowed me to solo, then continued to mentor me until I qualified as a Harvard display pilot (DA)”. Following on from getting my Catagory B Aerobatic DA I completed 10 hours training in 4 different Mustangs and was cleared to solo fly the P-51. It all started off on the T6 Harvard! 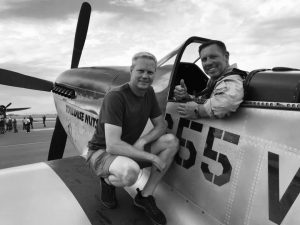 I can highly recommend an experience flight in the T6 Harvard. An experience or a full conversion on to this Advanced Fighter Trainer for any pilot wishing to broaden their horizons.  As you climb into this military machine, you will be stepping back in time to the late 1930’s early 40’s when pilots received advanced training on this aircraft before flying a fighter in combat weeks later – (Andy Goodall Harvard Display Pilot and Class Rating Instructor) More on Andys progress can be found at this link – Radial Airshows

Peter Kirkpatrick makes the conversion to the T6 Harvard

Peter is a leading UK Neurosurgeon who has many hours flying the amazing Pitts Special in some very unusual attitudes! Before Peter took to the skies in his very own Hurricane, he is got himself comfortable in the “beefier” T6 Harvard. The T6 Harvard is, of course, excellent preparation for the fighter aircraft such as the Hurricane, Spitfire and the P51 Mustang. Since accruing a few hours in the T6 Harvard Peter then went on to solo his Hurricane V7497 and has now completed over 10 hours and is working up to his Hurricane Display Authorisation. More information can be found about Kirk and his progression at the web site – Hurricane 501

Our other services include

Take a look at our exciting T6 Harvard videos